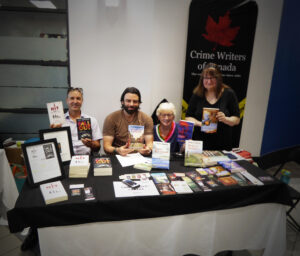 The collective term for authors: a tribe? a pack? a creation?

This post-restrictions business takes some getting used to. Did I really do all this before the pandemic? It seems that I can’t just stay home and write the way I have been doing for the past almost three years. Now, I am out on writing jaunts and with music groups. I like it.

It was a treat to get together with writers and readers at the Word Vancouver Festival. Writing is an isolating occupation and while many of us affirm that it suits us to be alone with our imaginations, it is surprisingly pleasurable to talk with other writers. In fact, the festival was a hybrid one so many readers were on Zoom. I missed them.

The authors with me in the photo are Winona Kent, author of Ticket to Ride and The Jason Davey Mystery series, traditional genre as mine are,

A.J. Devlin author of several books including Five Moves of Doom which have suspense but comedy as well.

Rick Alexander author of IHIT: The Lifestyle People are Dying to Live. This is fiction close to truth about life in gangs.

Surprisingly, we had a lot in common.

Back home I took a drive to Sechelt up the coast from me on a Saturday morning. A black shape bolted from the ditch at the side of the rode. I slammed on my brakes, not giving a thought to the traffic behind me and screeched from 80 km (50m-h) to 30 in seconds. Everyone stopped safely behind me. I still clipped the backside of a gorgeous bear. He summersaulted splayed out, gathered himself and fled into the bushes. I was at a full stop by this time. I watched him. A beautiful, glossy fat bear. He wasn’t dead. He could move. But he might be badly injured and still able to move scrambled out of the way and into the trees. He was heading into a residential neighbourhood. Was a wounded bear going to be a problem in the neighbourhood? Would he need veterinary help? Immediately, I couldn’t help him. He was no longer anywhere near the highway. I drove to Sechelt and called the Conservation officer. He was efficient and appreciated the call. He would pay attention to anyone calling in a sighting of the bear. I hoped he’d send someone out to look for it. This had never happened to me before. Bears can’t see very well. He probably heard the traffic, panicked and bolted not even seeing the approaching cars. It was impossible to avoid him completely.  When I got into my bath that night I thought of the bear. If was only bruised and not badly hurt, which I think was the case, he’d sure be looking for a hot springs to ease his sore muscles—or someone’s hot tub.