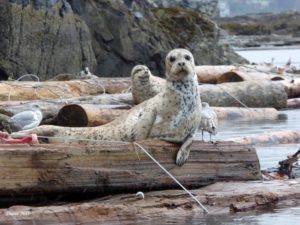 Even the seals are looking for social interaction.

A Word and Art Festivals, a crime writers conference, educational webinars interspersed with sun, beach, visitors and summer struggles with the jungle that is my garden meant a busy August. I love this quasi-post pandemic time where we can meet with real people and enjoy that social side of our lives again. I certainly did that in August. September has another event where I present to a group of writers and I will be at the Crime writers of Canada booth at Word Vancouver on September 25th. Lovely to have at happening this year. I will see the books of other authors and get tips and advice that flow freely over coffee.

At a Zoom meeting this month four authors discussed whether to use British, Canadian or US spelling in their books. This can be the publisher’s choice but occasionally the author can decide. Camel Press asked me what I wanted when they were ready to publish Hazards in Hampshire. I said British spelling as my Emma Dakin books are set in Britain. They agreed but the printer, for reasons only known to the printer, changed all the spelling to US. Neither I nor the publisher knew this until the book was on the shelves. The publisher asked me if I wanted to change it in the next book, but I elected to stay with the US spelling which, for the most part, doesn’t bother me except for check which I am sure should be cheque. When the four authors discussed this, they revealed that all their books contained US spelling. One author set her books in Britain and was published by a British publisher. Her books were still published with US spelling, because that is the biggest market and the conventional wisdom is British and American readers will accept US spelling but US readers won’t accept British and Canadian spelling. One author went so far as to say that she didn’t think there was any such thing as Canadian spelling. I beg to differ there. After all, I have a Canadian dictionary, so ITP Nelson obviously thinks we do. It makes you wonder what the language will look like in twenty years. If it’s changing, I’ll defend cheque. May that word endure.