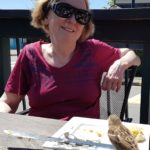 Where have I been? Writing. Because I didn’t have a publicist sending me reminders, I ignored my website and concentrated on writing. I had no idea so much time had passed until I realized I hadn’t heard from friends and readers for some time and, while I had been working away, I’d been missing a lot that was going on in the world of writing. Some of my colleagues from CrimeWriters of Canada, TWUC, Sisters in Crime and CWILL continued to send me emails which I answered, so I wasn’t completely cut off. I did get notices and corresponded on Facebook, but I haven’t been adding my bit to the blog world. I feel as though I’ve been on a long sojourn to a different planet. I’m back now.

Obviously, from the picture, the time wasn’t all spent on work. I did paddle outrigger and then coffee for hours afterwards in the Gibsons sunshine.

It seems the writing and publishing changes greatly in a short time. More and better writers arrive and produce wonderful books. When I first started writing, very few writers had university degrees in writing and had to work for years to hone their skills. Now that honing is done in university courses, writers come to the publishing competitive world inspired AND skillful. It’s an explosion of talent, and it should only get better.

It was exciting to attend Bouchercon last fall. There is certainly a huge bloom of Indie publishing. The best part of the conference was talking to the authors there and sharing ideas and concerns. The Surrey International Writers’ Conference is sending out registrations this month, so that’s a writers get-together that is always good value. I’m trying to push myself away from the computer and engage with colleagues. I love it when I do, but the effort to do so is huge, especially when I have to leave this natural wonderland I live in to attend.